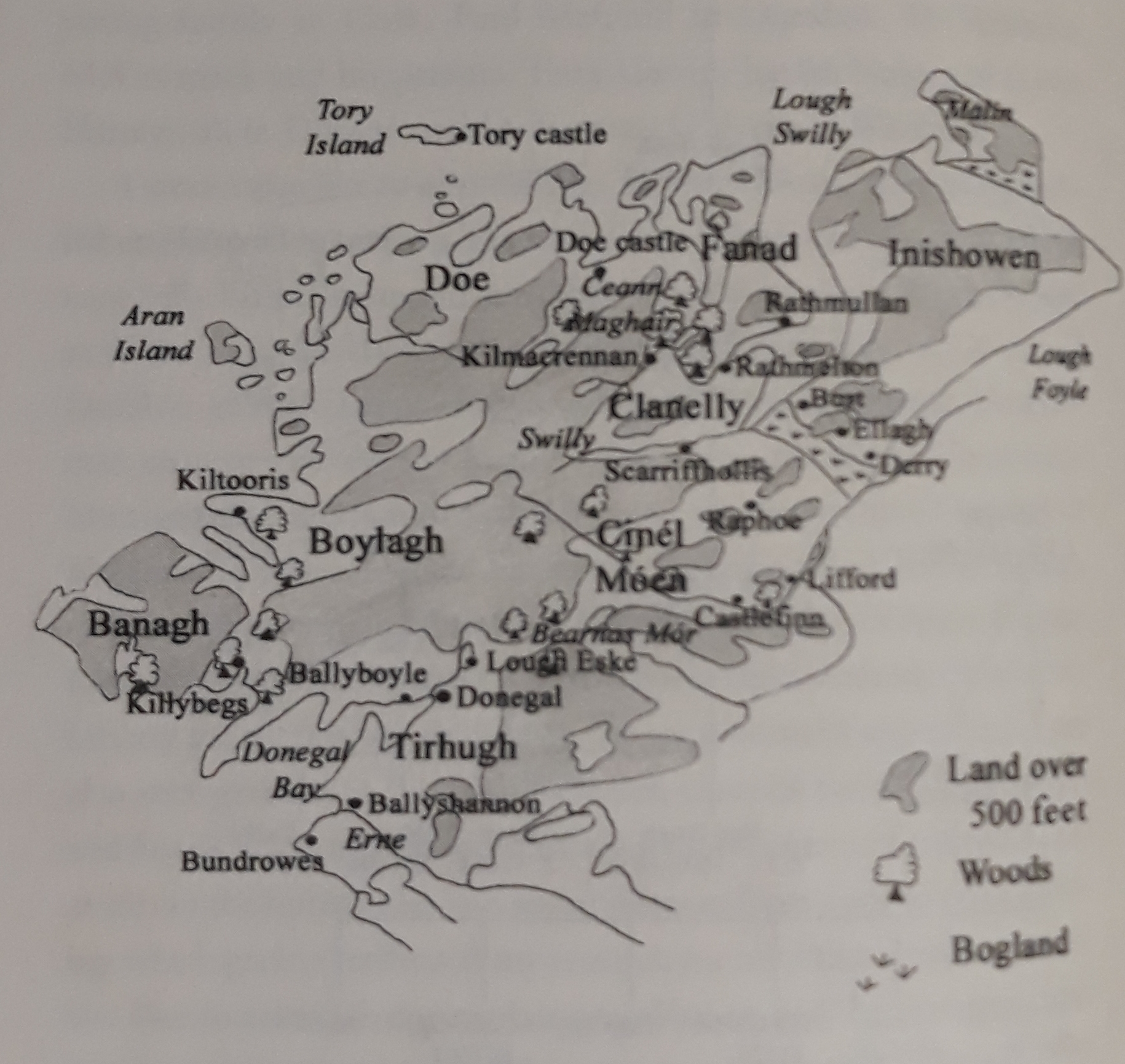 The O’Donnel clan used mercenaries from Scotland (who were trained soldiers) known as Gallowglasses – the Irish name for Milford comes from these soldiers. In 1392 the O’Neil clan invaded Tyconnell and reached Ceann Maghair where they plundered the area they were pursued by O’Donnell and defeated. The clans were continually in fighting for control and in 1461 there was a battle at Ceann Maghair to decide the line of the O’Donnell clan who would hold the chieftaincy. After the battle Aodh Ruadh O’Donnell was installed as chieftain at Doon Rock, Kilmacrennan. O’Neil and his army again plundered Ceann Maghair in 1523 AD again they retreated and were defeated at Cnoc Buide, Lifford.

Baile na ngalloglach had become an area of importance at this time of the Gaelic way of life. The strength of Ceann Maghair came from the chieftins and with the Flight of the Earls in 1607 it was weakened and in 1608 it was invaded by Sir Cahir O’Doherty and the camp was raised to the ground. It is referred to in 1654 and in 1656 in the Trinity College manuscripts, wrote in English as Kynivour and later Kinibre, and last referenced as Kinivire. It is thought locally that Ceann Maghair fort was in the old townland close to the island known as Doongoine.

Ceann Maghair is again mentioned in the Annals of the Four Masters in 919 A.D when a fleet of twenty Danish ships sail up Mulroy as far as Ceann Maghair. They are reported as having “Committed no depredation” Further evidence of both the recurring presence of the Danes and of the continuing importance of Ceann Maghair arecontained in a poem in praise of Eichnechan mac Dalaig, the first king O’Donnell Dynasty who came to the throne in 1200 A.D.  According to the poem, Eichnechan was attacked by the Danes at his base in Ceann Magahair. The Vikings were defeated and their wealth divided – “ten ounces to every strong tuath (district), five ounces to every great church” [The souterrain in Cratlagh on Charlie Graham’s land is known locally as “The Dane’s Den” lending credence to reports of Viking presence in Mulroy. 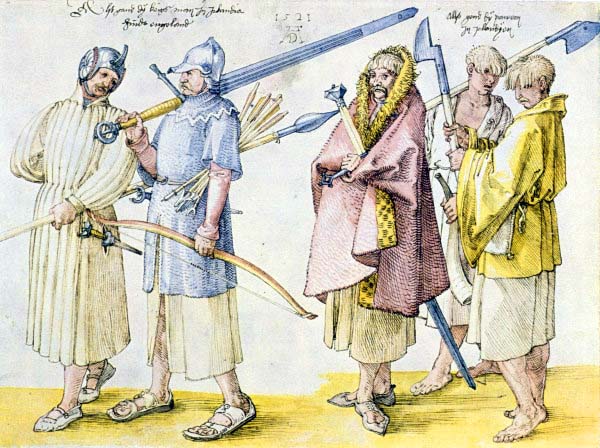 Ceann Maghair continued to be an O’Donnell stronghold up until Plantation times in the 17th century and was particularly associated with the Gallowglasses from the 13th century.  The town of the GallowGlasses. The original Gaelic name for Milford came from these paid mercenaries who came from Scotland to fight in the service of whatever Chieftain had hired them. They were heavily dressed in a coat of chain- mail and an iron helmet. They wielded both a long sword and a broad, keen-edged battle- axe. There were a number of different Gallowglass families but the one that concerns us is Mac Suibhne Fanad. The first Mac Suibhne to settle in Fanad was Eoin, grandson of Maolmhuire an Sparain, although the later Mac Suibhne chiefs are not descended from him. On a pleasure trip to Ireland with his foster father, Mac Gofradha of the Isles, he put in at Ceann Maghair to cut timber for his ship – building. This Eoin is reputed to have driven the O’Breisleins, who was the chiefs of Fanad at this time, out of the area and this would appear to be true as there are no mentions of the O’Breisleins in the Irish Annals after 1261. The O’Donnell came to Fanad soon after this to avenge his kinsman O’Breislein. Eoin Mac Suibhne met the O’Donnell in the battle at Gortcally where the latter was put to flight until they reached Aughanurson (now the family home of the author of this book) where the tide of the battle turned leaving O’Donnell victorious. Many of the scots were slain and because of this the places was called Mulan Na nAlbanach.( The Foolish of the Scots) After the Scottish War of Independence (1286-1314) some of these Gallowglass commanders sought a permanent residence in Ireland. One of the most successful of these was Murchadh Mear and his son Murchadh Og. It is from these two men that Mac Suibhnes of Fanad and other areas of Donegal are descended. The O’Donnell was quick to recognise the value of warriors and welcomed them to Donegal. They quickly took over three major sub-chieftaincies under the O’Donnell’s, those of Fanad, Doe and Bannagh. The senior branch, Mac Suibhne Fanad, was inaugurated by the O’Donnell himself at his own ceremonial site in Kilmacrenan.

Tradition has it that the Gallowglasses had one of their camps along the ridge at the part of Milford Main Street where the cattle and pig markets were later held (top of the town).

A MORE DETAILED ACCOUNT CAN BE FOUND IN “MILFORD: TOWARDS THE MILLENIUM” (1997) BY SHEILA FRIEL 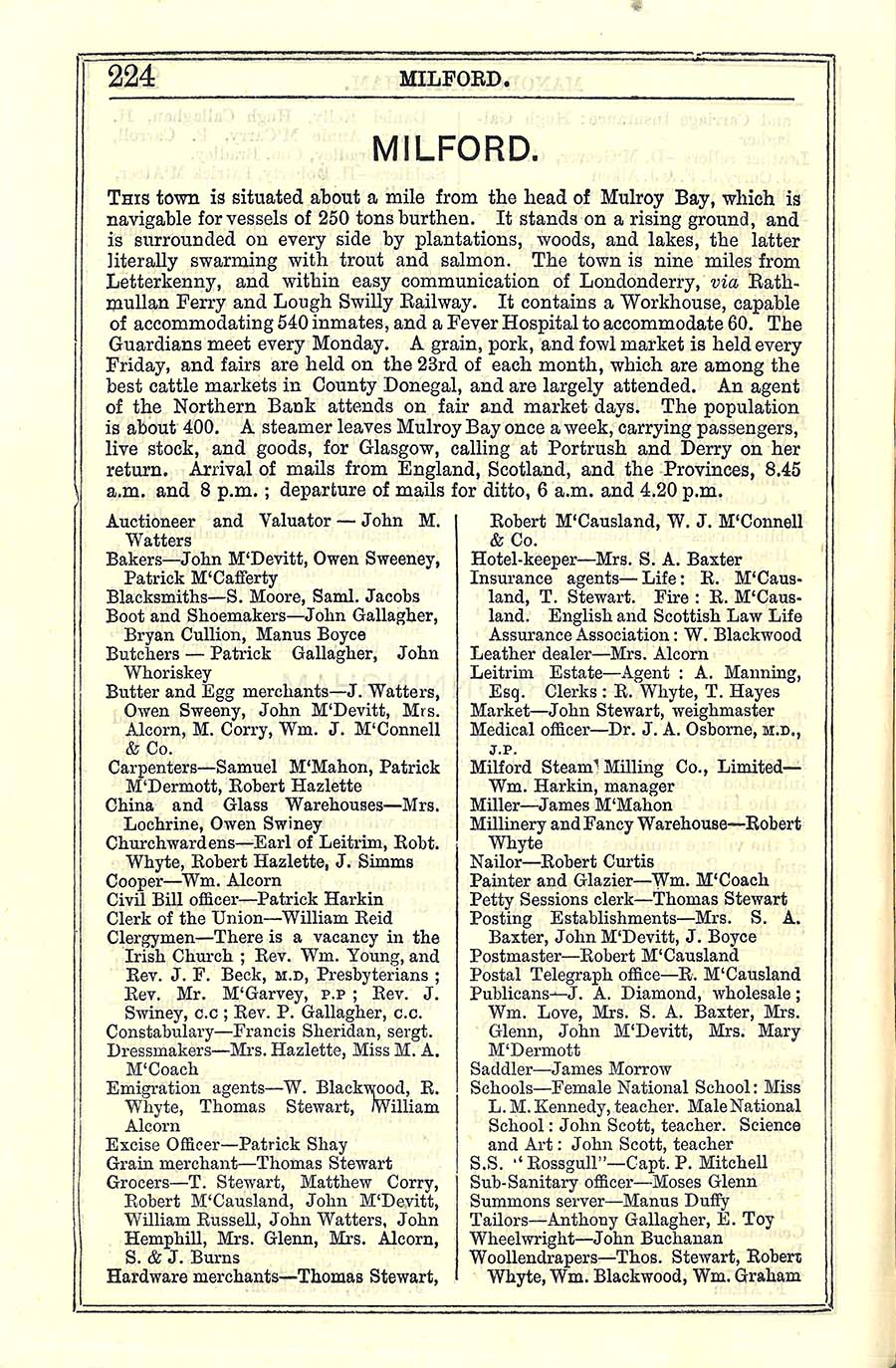